For the second year, SemioTiPS participates in November 2017 to Incheon international conference. This conference is organized to generate ideas for the upcoming National Museum of World Writing in South Korea, sponsored by the Korean Ministry of Culture, Sports and Tourism. During the conference, SemioTiPS will present methods to help design a new international museum.

Here is the abstract of our talk.

For 10 years, museums have been renewing their practices and standards. In Europe, in USA and in other regions, connecting with the audience appears as the main challenge. In France, an important report was published in 2017, under the general authority of the government: “Museums of the XXIth Century”. Along with other reports and initiatives around the world, it highlights several ingredients to ensure success and public outreach for new museums.

First, new museums need to be built as icons of their city or country. Designing a museum requires a specific attention to the visual signs it brings to its environment, and how they feed the general image of the place. Recent global conferences on architecture such as the Union of International Architect 2017 Congress organized in Seoul in September 2017, emphasized the importance of iconic museums to enrich the intangible heritage and international influence of a city. Audience surveys reveal that attractive museums benefit from a powerful visual ecosystem. And connecting the architectural image to a strong graphic language (an impactful logo, a relevant signage and a significant visual experience in the galleries) will benefit to the museum outreach – all the more to an institution dedicated to world writing.

Sensitive interaction with the audience appears as another key to new museums’ success. The museum of the XXIth century is a civic, ethic and playful meeting ground for visitors. More than presenting unique objects, the museum shall set up a place where people can meet and interact with historical and contemporary items. Then, designing a museum implies to pay a specific attention to immersive and sensitive devices. With this in mind, MoMA, Centre Pompidou and other museums have recently explored new solutions to offer a more interactive experience to their visitors.

The third ingredient of success consists in a co-creative design of museums. Collaborating with the public is key, from the conception of the museum project to the design of its overall environment (communications, branding, partnerships, related services). Museums such as the French National Maritime Museum have recently inaugurated a process engaging visitors and potential visitors in a co-creative brainstorm to re-think the museum. 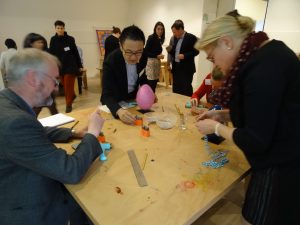 SemioTiPS conference in Incheon, on November 24th, 2017, aims at exploring how iconicity, interaction and collaboration have been effectively used by international and local museums around the world. From recent projects conducted with museum institutions in France and in the US, we present proven methods to apply iconicity, interaction and collaboration, so as to ensure that a museum meets success with an international audience.